How to build a racing game - straight roads 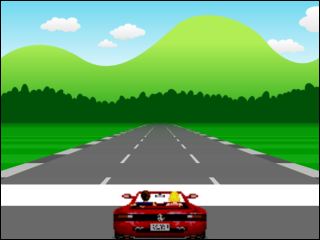 Previously we introduced our outrun-style racing game, but how do we get started building a pseudo-3d racing game ?

Well, we’re going to need to

Before we do any of that, lets go off and read Lou’s Pseudo 3d Page - its the main source of information (that I could find) online about how to build a pseudo-3d racing game.

Finished reading Lou’s article ? Great! We’re going to build a variation on his ‘Realistic Hills Using 3d-Projected Segments’ approach. We will do it gradually, over the course of the next 4 articles, but we will start off here with v1, building very simple straight road geometry and projecting it onto our HTML5 canvas element.

see it in action here

Before we get down to the implementation, lets use some basic trigonometry to remind ourselves how to project a point in a 3D world onto a 2D screen.

At its most basic, without getting into vectors and matrices, 3D projection uses a law of similar triangles. If we were to label:

Then we could use the law of similar triangles to calculate

as shown in the diagram below: 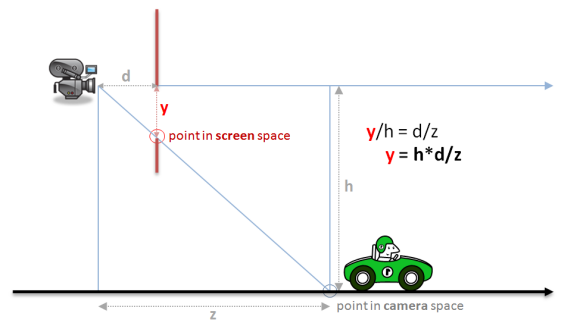 You can see that for both x and y, what we are really doing is scaling by a factor of

This sounds nice and simple in diagram form, but once you start coding its easy to get a little confused because we have been a bit loose in naming our variables and its not clear which represent 3d world coordinates and which represent 2d screen coordinates. We’ve also assumed that the camera is at the origin of our world when in reality it will be following our car.

More formally we should be:

NOTE: in a true 3d system a rotation step would come between steps 1 and 2, but since we’re going to be faking curves we dont need to worry about rotation

And so we can present our formal projection equations as follows:

NOTE: In a full blown 3d system we would more formally define a Vector and a Matrix class to perform more robust 3d mathematics, and if we were going to do that then we might as well just use WebGL (or equivalent)… but thats not really the point of this project. I really wanted to stick to old-school ‘just-enough’ pseudo-3d to build an outrun-style game. 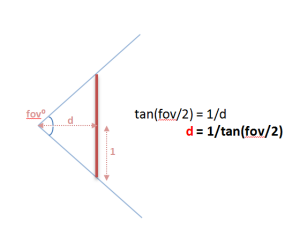 One last piece of the puzzle is how to calculate d - the distance from the camera to the projection plane.

Instead of hard coding a value for d, its more useful to derive it from the desired vertical field of view. This way we can choose to ‘zoom’ the camera if needed.

Assuming we are projecting onto a normalized projection plane, with coordinates from -1 to +1, we can calculate d as follows:

Setting up fov as one (of many) variables we will be able to tweak in order to fine tune the rendering algorithm.

I mentioned in the introduction that this code does not exactly follow javascript best practices - its a quick and dirty demo with simple global variables and functions. However, since I am going to build 4 separate versions (straights, curves, hills and sprites) I will keep some re-usable methods inside common.js within the following modules:

I will only be detailing methods from common.js if they are relevent to the actual game, rather than just simple DOM or math helpers. Hopefully you can tell from the name and context what the methods are supposed to do.

As usual, the source code is the final documentation.

Before we can render anything, we need a game loop. If you’ve followed any of my previous game articles (pong, breakout, tetris, snakes or boulderdash) then you’ll have already seen examples of my favorite fixed time step game loop.

I won’t go into much detail here, I’ll simply re-use some of the code from my previous games to come up with a fixed time step game loop using requestAnimationFrame

The idea being that each of my 4 examples can call Game.run(...) and provide their own versions of

Again, this is a rehash of ideas from my previous canvas games, so if you need clarification on how the game loop works go back and read those earlier articles (or post a comment below!).

Before our game loop starts, we load 2 separate sprite sheets:

The spritesheet was generated with a small Rake task using the sprite-factory Ruby Gem. This task generates the unified sprite sheets as well as the x,y,w,h coordinates to be stored in the BACKGROUND and SPRITES constants.

NOTE: The backgrounds are home-made using Inkscape, while most of the sprites are placeholder graphics borrowed from the old genesis version of outrun and used here as teaching examples. If there are any pixel artists out there who want to provide original art to turn this into a real game please get in touch!

In addition to our background and sprite images we will need a number of game variables, including:

Some of these can be adjusted using the tweak UI controls to allow you to vary some of the critical values at run-time to see what effect they have on the rendered road. Others are derived from the tweakable UI values and recalculated during the reset() method.

We provide a key mapping to Game.run that allows for simple keyboard input that sets or clears variables to indicate any action the player is currently taking:

The variables that manage the player’s state are:

These variables are set within the update method, which will:

For straight roads, the update method is pretty clean and simple:

Don’t worry, it will get much more complicated when we add sprites and collision detection in the final version :-)

Before we can render our game world, we need to build up our array of road segments within the resetRoad() method.

Technically, each segments p2 is identical to the previous sections p1 but we will find it easier to maintain them as separate points and transform each segment independently.

The reason we maintain a separate rumbleLength is so that we can have fine detailed curves and hills but still have long rumble strips. If each alternating segment was a different color it would create a bad strobe effect. So we want lots of small segments, but group them together to form each rumble strip.

When the car reaches the end of the road we will simply loop back to the beginning. To make this a little easier we provide a method to find the segment for any Z value even if it extends beyond the length of the road:

Our render() method starts with drawing a background image. In future articles when we add curves and hills we will want the background to parallax scroll, so we start off in that direction here by rendering the background as 3 seperate layers:

The render function then iterates over the segments, and projects each segment’s p1 and p2 from world coordinates to screen coordinates, clipping the segment if necessary, otherwise rendering it:


We saw the math required to project a point earlier, the javascript version combines the translation, projection and scaling equations into a single method:


In addition to calculating screen x and y for each of our p1 and p2 points we also use the same projection math to calculate the projected width (w) of the segment.

Given the screen x and y coordinates for both p1 and p2, along with the projected road width w, it becomes fairly straight forward for the Render.segment helper to calculate all the polygons it needs to render the grass, road, rumble strips and lane separators using a generic Render.polygon helper (see common.js)

Finally, the last thing required by the render method is to render the ferrari:

The reason this method is named player instead of car is because our final version of the game has other cars on the road, and we want to specifically differentiate the player’s ferrari from the other cars.

The Render.player helper ultimately uses the canvas drawImage method to render a sprite after scaling it based on the same projection scaling we saw earlier:

Where z in this case is the relative distance of the car from the camera stored in the playerZ variable.

It also ‘bounces’ the car a little at higher speeds by adding a little random-ness to the scaling equation based on speed/maxSpeed.

And boom there you have it:

Thats actually a fairly large chunk of work already just to get us setup with straight roads. We added…

… but it gives us a good foundation to build on. The next 2 articles, describing curves and hills should be a little easier going, before getting more complex in the last article where we add sprites and collision detection.