I was inspired by a talk from @jasonrclark at this weeks @pdxruby that reminded us that the Shoes project is still alive and well. I had a little free time so I thought I’d make a tiny contribution and take a day to port over one of my simpler javascript games to Shoes.

Shoes is a cross-platform Ruby desktop GUI framework aimed at beginners wanting to get into programming. For those of us who have been in the Ruby community for a while we might have assumed that Shoes died when _why left the community. However, from the shoesrb.com history…

_“Way way back in the day, there was a guy named _why. He created a project known as Hackety Hack to teach programming to everyone. In order to reach all corners of the earth, _why decided to make Hackety Hack work on Windows, Mac OS X, and Linux. This was a lot of work, and so _why decided to share his toolkit with the world. Thus, Shoes was born. Everybody loved Shoes. Many apps were made, and put into The Shoebox, which no longer exists. But, one day, why left. In his memory, Team Shoes assembled, and carried on making Shoes. They released Shoes 3 in late summer 2010."

… and they are actively working on Shoes4.

So here’s a version of Tetris you can run with Ruby Shoes:

For the most up to date instructions on how to install Shoes4 you should refer to the official project README. You’ll need:

Once you have JRuby installed, you can clone the tetris-shoes repository and use JRuby to run the Shoes script: 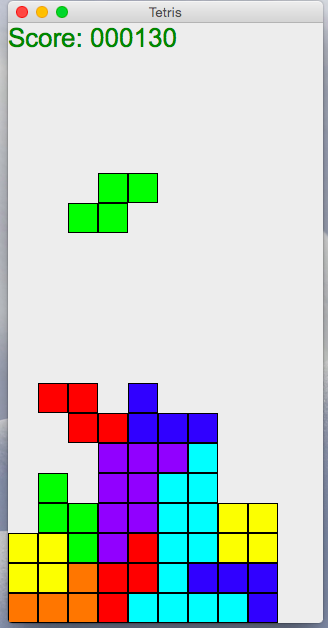 Porting the game to Shoes involved turning the engine into Ruby and extracting out the GUI specific parts (rendering and event handling) to use Shoes instead of the browser’s Canvas/DOM.

The majority of the engine is pure Ruby, and beyond the scope of this article - you can checkout the source for more details.

The Shoes specific code starts with a Shoes app that contains our game engine:

Then we hook up keyboard event handling:

… and use the Shoes #animate method to create a game loop:

… rendering for a tetris game is really simple, we need to use the Shoes #fill and #rect methods to create rectangles:

… and then use that method to render all of the occupied blocks, including the currently active piece:

… and finally we need to check if the game has finished:

Shoes is a nice, easy to use platform for building simple desktop applications and that includes simple games as well. It was pretty easy to port an existing game to Ruby and make it fit into the Shoes framework.