This blog has been quiet for a while…

So I haven’t had much time to write for a while. 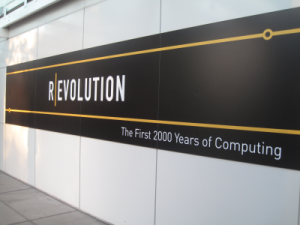 However, I did get a very nice break over christmas where I went down to California and managed to finally visit the Computer History Museum - Yes, I am a geek, this is a technical blog, deal with it!

I really, really enjoyed the visit. I had almost the full day, but I wish I had a few more hours - I’ll have to plan a second trip. The museum is very well organized, although I wasn’t always 100% sure I was going in a chronological direction.

Most of the museum is dedicated to the main exhibition Revolution - The First 2000 Years of Computing, taking us through from the Abacus to the World Wide Web:

I mean, of course, I knew of the Babbage Engine, the Eniac, Enigma, Collosus and Cray and such, (not to mention the Abacus and the Slide Rule), but I hadn’t really put them into context until wandering (in chronological order!) through the museum, and it was really fascinating.

I also really enjoyed seeing some of the computers I grew up with, the Commodore64, ZX Spectrum, Amiga, SpeakNSpell, Little Professor… and of course the games, Pong, Atari, PacMan, Infocom…

I have only a few, very very minor negatives:

Even so, I highly recommend any self respecting computer geek taking a day out to go visit in person, or even just online:

Here are some photo’s of the bits that stood out for me (in no particular order):

UPDATE: _The links below may be out of date because the computer history museum display is subject to change