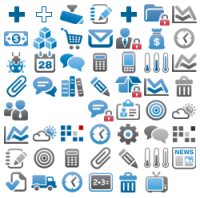 I have released a minor update to the sprite-factory ruby gem.

For any of the layout options, including :packed, you can now add:

The :margin option is most useful to avoid the bleeding that might occur when the browser scales to support increased text size or zooming (e.g ctrl+/ctrl-). Depending on the scale factor, the browser may decide to use an extra pixel of your source image leading to the next image bleeding through.

This can now be avoided using the :margin => 1 option to ensure a gap is included around the source image to take into account any bleeding that might occur (usually a value of 1 or 2 pixels is adequate)

If you want to specify a pseudo class such as :hover for some of your images, the library will now map -- (double dash) to a colon : in any source image filename. For example, with the following files:

… the library will generate:

If you want to specify a custom selector for each individual image, you can simply name the image files accordingly - the library will map __ (double underscore) to a single space in any source image filename. For example, with the following files:

… when run without any selector:

As usual, installation is just a gem away:

And detailed instructions can be found in the README.

Let me know if you have any problems/feedback.