How to build a racing game - hills 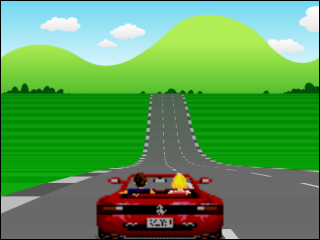 Previously I published a simple outrun-style pseudo-3d racing game and followed up with a couple of articles on how to get started with straight roads and curves.

This time around we’re going to tackle hills, and luckily it’s a lot easier than when we included curved roads.

In the earlier article we used a law of similar triangles to introduce 3d perspective projection:

… which led us to our equations for projecting a 3d world coordinate into a 2d screen coordinate.

… but since we were only dealing with straight roads at the time our world coordinates only needed a z component because both x and y were zero.

This set us up nicely because now, to add hills into the mix, all we need to do is give our road segments an appropriate non-zero y coordinate and our existing render() function will just magically work.

Yup. That’s really all we have to do to get hills. Add a y component to each road segments world coordinates.

Changes to the road geometry

We modify our existing addSegment method to allow p2.world.y to be provided by the caller, while p1.world.y is set to match p2.world.y of the immediately preceding segment:

Add some constants to represent LOW, MEDIUM or HIGH hills:

Modify our existing addRoad() method to accept a y argument that will be used, along with easing functions, to gradually ease into and out of the hill:

Finally, just like we did in the previous article with addSCurves(), we can layer on whatever geometry building methods we like, such as:

Changes to the update method

In an arcade game like this, where we are not attempting to simulate reality, the hills don’t affect the player or the game world in any real way so there are no changes required for the update() method.

… and there are also no changes required for the render() method either since our projection equations were already set up to project our road segments correctly with non-zero y coordinates from the start.

Apart from adding y coordinates to all the road segments, the only other change we might make is to ensure the background layers are offset vertically with the hills (as well as horizontally with the curves). We do this with the addition of a final argument to the Render.background helper.

The simplest mechanism is to simply offset it relative to the playerY position (which needs to be interpolated from the world y positions of the players current segment).

This isn’t the most realistic behavior because we probably should take into account the slope of the players current road segment, but the effect is simple and works well enough for a simple demo.

So there you have it, we can now add real hills to our (fake) curves:

The work that went into v1 straight roads was really where we put into place the infrastructure for including true 3d projected hills in our demo… I just didn’t tell you that at the time.

Next up, in our final article, we will introduce sprites and add trees and billboards to the sides of the roads. We will also add other cars to race against, collision detection and record your ‘fastest lap’…