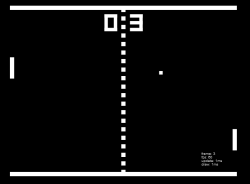 The GameRunner is very generic. It provides some javascript pre-requisites (see below) and a rudimentary game loop:

On each iteration of the loop:

And thats really all it does. You can find the demo here

I want to build a framework that does not require any 3rd party libraries. Since these games are going to be based on the HTML <canvas> and only supported in modern browsers there is no real need for including a full library like jQuery or prototype.js.

However, there are a few pre-requisites we are going to need:

This method is standard in ECMAScript 5. It is one of the most important methods in javascript development and is used to ensure that instance methods used as callbacks (e.g. event handlers) have the correct this set. Its also used to curry arguments when compositing methods.

Another ECMAScript5 standard encapsulates the construction of an object with a specific prototype.

Many attempts have been made to mimic OO class construction patterns in javascript, but in many cases it can be simpler to avoid these entirely and embrace javascripts prototypical nature.

Again, modern browsers will provide this method, but its easy enough to implement it ourselves when necessary:

What’s missing from Object.create is the ability to pass arguments to some kind of constructor function. I like to add a wrapper Object.construct that provides this additional behavior on top of the standard Object.create

Not a standard, but typically provided by libraries such as jQuery or prototype. The ability to copy all of the properties of one object to another can be very useful on occasions.

Of course, we need to be able to respond to DOM events. There are a number of established methods for supporting older browsers, but since we are only supporting modern browsers with the <canvas> we can be fairly sure that these browsers support the standard addEventListener (yes, even IE supports it in IE9)

Knowing when the page is ready to load is also a solved problem with 3rd party libraries such as jQuery and prototype.js, but again, since we are only supporting modern browsers we can be fairly sure that these browsers support the DOMContentLoaded event (yup. IE9 supports this)