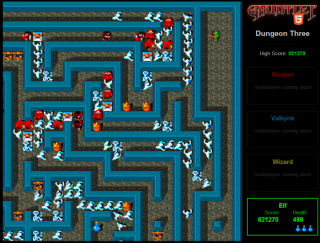 Before I embark on trying to make a multi-player Gauntlet-style game, I wanted to spend some time writing up how the single player version works first, while it is still relatively fresh in my mind.

This game is a little bit more complex than my previous games, and so requires a little more structure, and in turn, a little more explanation for how-it-works.

This first article will try to cover a lot of ground to establish the foundation upon which the game sits, including:

Most of the topics for this article are all quite general topics that can apply to any javascript game, many of which have been touched on in my previous articles, and will quite likely resurface in future games as I build up more and more of a re-usable ‘engine’.

Subsequent articles will be more Gauntlet-specific, and cover topics such as maps, entities, collision detection, and game logic…

… but, for now, lets go ahead and dive into the game’s foundations

The javascript code for this game is broken into 3 parts:

Both vendor.js and game.js are unified versions of multiple, smaller files. A small Ruby gem called unified-assets is used to provide a command line interface for re-generating these files whenever the underlying source files are modified.

NOTE: a more modern version of this idea would be to use tools like Sprockets, or RequireJS

I’m not a big fan of large, controlling, frameworks. I much prefer to work with small (micro-) libraries that do one job and do it well. In the unified vendor.js file you will find the 3rd party dependencies used for this project:

These are fairly self-explanatory. While this game is mostly canvas-based. The scoreboard is DOM-based and uses sizzle.js to locate DOM elements, and animator.js to fade them in & out. The audio-fx.js library is a little library I wrote when making my snakes game to hide some of the quirkiness of cross-browser HTML5, and the state-machine.js library is the finite state machine I wrote when making my breakout game (I will talk more about state machines later in this article)

The base game library consists of the generic code that is not Gauntlet specific, and might be reused in other games. This is code that started off life as the base for a Pong game, evolved through Breakout and Snakes and I’m sure will evolve further as I make future HTML5 games.

It is broken down into individual source modules:

NOTE: at this point, the code is still evolving as it is copied from game to game and there is no single ‘game library’ that is shared across games. At some point I hope that will change when this code matures into a stable re-usable game library.

To use the engine, we define a game object implementing the following methods:

Then get the game going with the Game.run() static method:

The base game engine started back in my first javascript game, pong. For that game, the loop was very simple. Using requestAnimationFrame to run a 60fps loop and, for each iteration:

This worked well for simple bouncing ball games, but requestAnimationFrame (or any browser implementation of a game loop) cannot guarantee a constant 60fps loop, and in more complex games it becomes important to know how long a single frame is going to be.

So when I moved on to make a boulderdash game I switched to a more stable fixed timestep loop where the game frame rate is independent of the rendering frame rate.

The idea being, the Game.Runner can .start() a game loop that will run as fast as the browser allows (using requestAnimationFrame) but we will maintain an independent update loop, by accumulating dt until enough time has passed to trigger one (or more) game update() calls:

NOTE: this is a simplified version of the real code for clarity.

NOTE: Since requestAnimationFrame will go idle when the browser is not visible, it is possible for dt to be very large, therefore we limit the actual dt to automatically ‘pause’ the loop when this happens. Interesting to note is that when we do have a large dt we make sure to run game.update in a while loop to ensure the game ‘catches up’ without missing any updates, but we don’t bother doing this for render.update where simply rendering the most recent state once is enough to catch up.

In order to keep game logic from becoming spaghetti code, a little decoupling is in order. There are 2 key patterns that I find greatly simplify my game logic:

For implementing a state machine, I use my own javascript-state-machine library that I introduced back in my breakout game.

For Gauntlet, the high level FSM configuration manages switching between:


For implementing custom events, I have hand-rolled a very simple publish/subscribe pattern in the js/game/pubsub.js module.

For Gauntlet, the high level PubSub configuration is:

This allows us to concentrate our game logic within simple event handlers:

NOTE: I plan to unify these 2 patterns in a future release of the javascript-state-machine library.

Much of the game is data-driven, either via the constants defined at the top of gauntlet.js, or via the cfg object.

The constants are generally ‘magic numbers’ (e.g. sprite indices) or values that can be tweaked to affect gameplay, such as how fast the player can move, or how much damage it takes to kill a monster. We will examine these constants in much more detail in future articles when we talk about the game maps, entities, and collision detection.

The cfg object contains configuration used by various game components such as the finite state machine, the pubsub handler, the resource loader, the keyboard handler, etc:

Pushing the generic code down into a base game library allows the Gauntlet-specific code to stay tidy, and fit into a single js\gauntlet.js file! We can use the javascript module pattern to create a closure over some private implementation details and return our game object at the very end.

Phew, we just whizzed through a lot of game foundations:

Much of this is general purpose code that can apply to any javascript game, and so far, not very Gauntlet-like…

… but never fear! Subsequent articles will be much more Gauntlet-specific, and cover topics such as maps, entities, collision detection, and game logic…