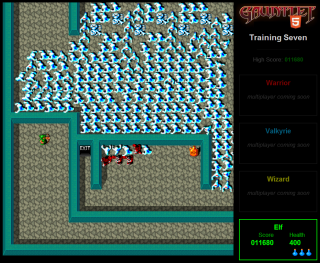 Last time we looked at our game entities and their update() methods and talked a little about monster AI - which really boiled down to:

move towards the player!

What we glossed over was how the entities occupy() the map, and trymove() within it.

This article will reveal more details about those methods, what the maps internal data structure looks like, and how collision detection works within the game.

We can check if 2 entities overlap with a simple helper method:

Given this method, the simplest possible approach to collision detection would be to maintain a single array of entities, each with a position (x,y) and a size (w,h), then in each game frame compare every entity against every other entity to see if they overlap()

However, this is an O(n^2) algorithm, and while it might work in a game with just a few entities, in Gauntlet we can have hundreds of entities in a single level. 500 entities would require 250 thousand collision checks every frame - not good. 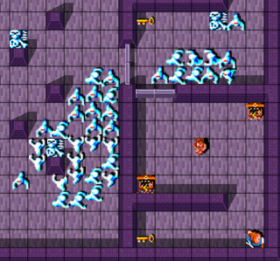 The solution is to use a Spatial Partitioning technique and split collision detection into 2 separate phases:

There are many different partitioning techniques available to us:

For Gauntlet, we have already defined our map in terms of a tile-based grid, and all of our entities are the same size (roughly 1 tile) so it makes sense for us to use a simple grid to partition our space.

If we had different sized entities we might be better off with a QuadTree, but for our purposes a simple grid works out well.

Since our entities are all equal (or smaller) in size than our cell, we can be sure that a single entity can only ever occupy 1, 2, or at most, 4 cells

To support this, in addition to our single array of entities, we add the following data structures

A SIDE NOTE - on performance

Before we continue, lets take a small time out to talk about javascript arrays, objects, and performance.

If we plan to use arrays to track entity.cells and cell.occupied then we have to expect those arrays to be changing frequently within our game loop.

Specifically, we should recognise that the only way to remove an arbitrary element from a javascript array is to splice() the array and create a new one. Thus we might be creating many (small) arrays. This should make us pause and consider performance implications, specifically garbage collection issues.

We could recognize that we actually don’t care about ordering in our 2 cases and that what we really want is a set, not an array, but javascript doesn’t have native sets!

We might consider using an object as a set, since its effectively the same thing, but we are then left with using a for in loop to iterate over the keys, and delete for removing keys. These both have performance implications, the for in loop is simply slower than a normal for loop over an array, while using delete on an object changes its internal structure and frequently causes it to be de-optimized by the browser’s hot spot compiler - again causing performance issues.

What this boils down to is that there is no hard and fast rules for the right data structures to use, you must always measure your results and choose based on actual performance, not theoretical performance.

I experimented with both approaches

And it turned out, for Gauntlet where the arrays are very small (typically 1 to 4 elements) the Array case was much faster then using an Object as a Set. Although it did result in a little more memory allocation, and therefore more garbage collection, the amount was small and did not result in any noticeable game stutter.

In order to encapsulate the problem and experiment with alternative solutions, we hide the implementation of the core methods behind the following helper methods:

If we eventually find that garbage collecting the arrays causes issues, we can implement a ‘pool’ of arrays, or replace these methods with a more optimized Set class. Long term, for a more formal game library, we would almost certainly want to invest some effort in a high performance, garbage-friendly, Set class.

A SIDE NOTE - on coordinates

The game also defines the size of a tile in game pixels:

So, for a map that is 10x10 cells, the pixel size of the map will be 320x320. We also set this as the size for our logical <canvas> element and let the browser take care of scaling it to whatever physical size the canvas element happens to be (based on @media queries)

In order to quickly convert between game pixel coordinates and game tile coordinates we use a couple of simple helper methods:

Now, given a pixel (x,y) position, we can access any map.cell():

Ok, so lets get back to the entities and the map. We want to start with a helper method that will return, for any given rectangle, the cells that overlap that rectangle.

NOTE: this method assumes entities are equal or less than the size of 1 TILE. To support larger entities we could refactor this method to be more general purpose, but it works for our needs.

We can now place entities on the map using the map.occupy() method, which will:

Note that this method has no collision detection logic. It assumes that the calling code will check for collisions before trying to occupy() the map…

Now that entities can occupy the map, we want to allow them to move into empty space but stop if they collide with another entity. With our spatial partitioning grid in place, we now only need to check for collisions against entities in the same cell(s) that we occupy.

To implement this algorithm we start with the occupied() method which, for a given rectangle, returns the first entity that overlaps (if any):


Given the occupied() method above, we can now implement a trymove() method for a given entity, with a specified direction and speed, to move that entity in that direction unless its already occupied():


… and that’s it! We’re done with collision detection. An entity can now occupy() the map and trymove() within it. 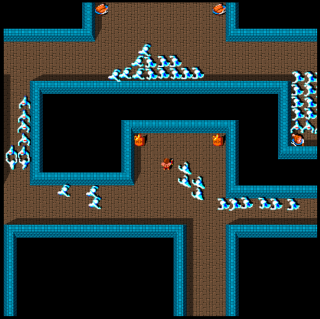 Yikes. Too much detail ? Lets recap:

We could simplify this a little, instead of having an entity occupy multiple cells, it could just occupy the one cell at its (x,y) position. Since we would no longer be tracking exactly which cells the entity occupies, we would have to change the algorithm to check against 9 cells per entity (the one it occupies + all 8 neighbouring cells). This would be slower than just checking against the more exact 1-4 cells, but would still be much better than a brute force O(n^2) algorithm, and would lead to simpler code…. Maybe next time!

The code in this article (as in the others) is a simplified version of the real code for clarity. The main differences are performance optimizations to avoid allocating new arrays/objects when possible, and I’ve also glossed over the fact that the entities are actually NOT all exactly 1 TILE wide/high. They actually have slightly different collision boxes (cbox), e.g. Weapons have much smaller collision boxes.

But I think the main points are covered.

In the next article, we can get out of the depths of the code and step back up to the high level game object and all of the state machine & event handlers that make up the actual game logic…