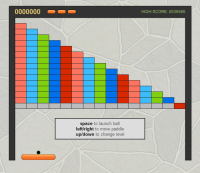 Switching from Pong to Breakout introduces a little more complexity in the game state, with scores, highscores, lives, levels and more.

So it becomes worthwhile to invest a little time in some better coding patterns.

Breakout uses the same basic Game.Runner that was abstracted from my earlier pong game here, with some minor changes:

The biggest change is the introduction of the state machine which helps keep the game code from degenerating into a complex spaghetti mess.

First, we need to clarify some terminology. Depending on the context, when we say game state we could mean one of 2 things:

A finite state machine is used to manage the second case, the game mode. It automatically generates methods to transition between the game modes and provides events for custom code for when those transitions occur. It is during these events that the game values can be cleared or set.

Typically, when I talk about the game state, I’m refering to the second case, that which is controlled by the finite state machine, e.g. the game mode. If I want to refer to the state of some internal game variable I will be specific and say something like number of lives, or current position.

For example. The play() method might be used to transition from the menu state into the game state, during which time the current values for score, lives, level etc can be set.

Confused yet ? Great, then lets move on…

For a simple game like breakout I can start off with 2 simple states:

There is a single event play to get from menu to game state, but there are 2 different events that can be used to transition in the other direction, abandon and lose. The FSM is constructed with the following simple configuration:

The state machine takes care of some infrastructure and provides us with:

This allows us to simply hook into the state machines events in order to set the internal breakout game state values:

In addition to the high level game state (menu vs play), any individual object within a game can also benefit from being a finite state machine. For example, in a game like gauntlet, the individual baddies might have ‘idle’, ‘searching’, ‘chasing’, ‘dying’ states.

However, in a simple game like Breakout, this wasn’t necessary, so thats a strategy I’ll have to wait until I tackle a more complex example….