What does "Finished" Mean Anyway ?

At the start of August I started a snakes game and had the mechanics up and running in a few hours, you can see them in action in the original article. I wanted to take those raw mechanics and polish the game until it was ‘finished’, by working on things like:

About 8 weeks have passed since I started, during which time I have played DragonAge2, had the Flu, taken a Vacation, and managed to keep the Day Job. Somewhere in there, I spent about 60 hours total on Snakes - thats not too bad, averaging about 8-10 hours a week, here and there, is pretty good for a spare time project.

In October, I’m starting a new extra-curricular activity that will take up a lot of my free time, and now I have a hard deadline so this coming weekend (9/25), I’m pushing the final game, ready or not.

At work, especially in a startup, shipping is everything. Finished typically means ‘good enough to ship by our standards’ - that last part is important because different companies obviously have different standards.

When its a personal project, shipping is not so critical, and having high standards can mean you never ship, you polish and polish until you get so bored with it you can’t stand to look at the code anymore.

Boy, does it take a lot of time!

For Snakes, I’m disappointed to have to completely cut some of the things I was really looking forward to doing:

What Made It In

… but when I think about all the little touches that did make it, I don’t feel too bad: 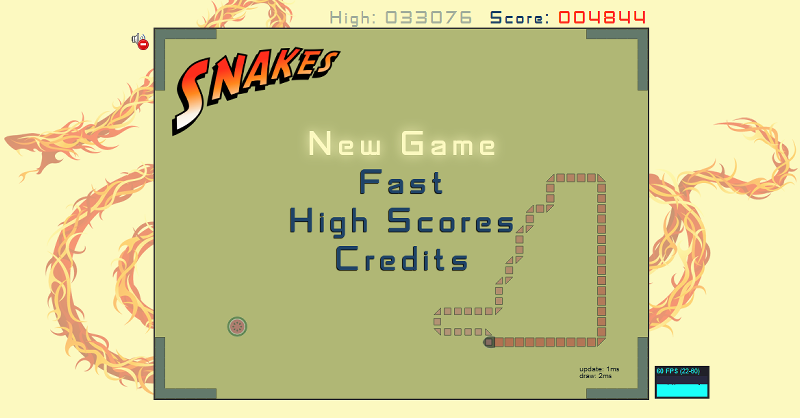 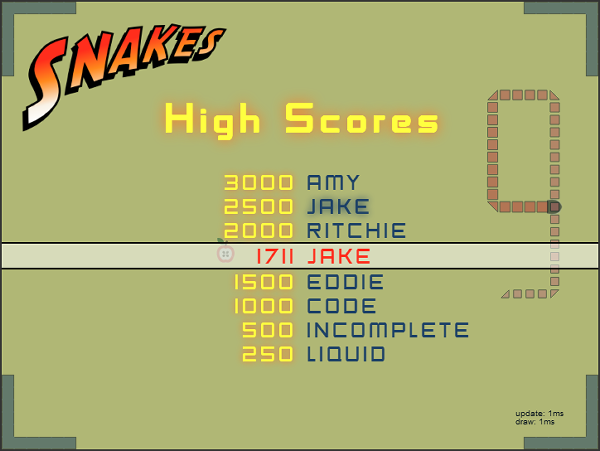 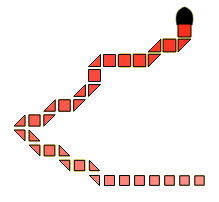 What Didn’t Work Out

Some things I tried but didn’t work out

And some things I hope to do in this last week before I finally push it.

So, 60+ hours for a Snakes game, spread out over 8 weeks! - I guess I’ve got a lot more practice to do before I think about entering a LudumDare 48 hour Competition.

Better get back to it…

Come back again next Monday (9/26) to play the final game!